Paula Cogliano earned her B.A. in Stage Management at Ithaca College. She worked at the Old Globe Theater in San Diego, transitioning to Higher Ed Administration at MIT in 2007. Before joining Concourse she worked in the Office of Experiential Learning supporting the Dean as well as D-Lab. Outside her work with Concourse, she is an avid reader, theater enthusiast, and culinary adventurer. 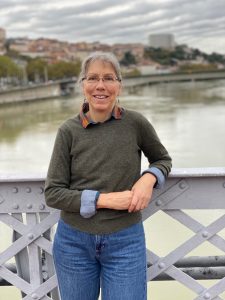 Anne McCants is the Ann F. Friedlaender Professor of History. She studied economics, German, and history at Mount Holyoke College, and completed her Masters degree in economics and Ph.D. in history at UCLA and UC Berkeley, respectively. She came to MIT in 1991 where she has served as Head of History, and as a Head of House in both graduate and undergraduate dorms. Her teaching is focused in the areas of European economic and social history and social science research methods. She is the author of Civic Charity in a Golden Age: Orphan Care in Early Modern Amsterdam (1997), and numerous articles and edited volumes on historical demography, material culture, technology in social context, and the standard of living in the Dutch Republic. She is currently engaged in several major projects: one examining the long-term roots of economic development with a particular focus on the role played by institutions of the family and gender equity, and developing new measures for the study of wellbeing; another on the economic and social history of the Dutch Cape Colony in southern Africa; and a study of the economic impacts of the ‘Little Ice Age’ on urban Paris during the 16th – 18th centuries. She serves as President of the International Economic History Association and Editor of the Journal of Interdisciplinary History. Her favorite ways to unwind are walking her dog Katie, cooking/baking, working with fibers and textiles, and digging in the garden.

Diana Henderson majored in English and Philosophy while spending most of her outside time doing theater, dance, and music at the College of William & Mary in Virginia.  She received her doctorate in English and Comparative Literature from Columbia University, and taught at Middlebury College before joining MIT’s Literature faculty in 1995.  She is a MacVicar Faculty Fellow. Her teaching interests include early modern poetry and culture, gender studies, world drama, and Shakespeare; she received the 2005 Baker Award for Excellence in Undergraduate Teaching.  Diana is the author of Collaborations with the Past: Reshaping Shakespeare Across Time and Media (2006; paperback 2012) and Passion Made Public: Elizabethan Lyric, Gender and Performance (1995), and the editor of Alternative Shakespeares 3 (2008) and A Concise Companion to Shakespeare on Screen (2006), as well as many articles on topics ranging from female sonneteers to James Joyce to the Hindi film Omkara.  She is Associate Editor of the journal Shakespeare Studies and was the 2013-14 President of the Shakespeare Association of America.  She has been a dramaturg, collaborated with the Royal Shakespeare Company and other professional theater troupes, and unwinds at the piano.

Ryan Lang was an undergraduate and graduate student at MIT, earning an S.B. in electrical engineering (2002) and physics (2003), an M.Eng. in electrical engineering and computer science (2003), and a Ph.D. in physics (2009). He returned to MIT in 2019 to teach physics in the Concourse program. His research interests are in the areas of astrophysics and Einstein’s theory of general relativity. Since 2015, he has been a member of the LIGO Scientific Collaboration, an international team of researchers who search for gravitational-wave signals generated by extreme objects like neutron stars and black holes. Every January, he participates in the MIT Mystery Hunt, a weekend-long puzzle competition held on the MIT campus. During the rest of the year, he relaxes by spending time with family and friends, playing board games, following the Red Sox, and keeping up with his DVR.

Linda Rabieh received her Ph.D. in political philosophy from the University of Toronto. Having previously taught at Colorado College and Tufts University, she joined the Concourse faculty in 2010. She is the author of Plato and the Virtue of Courage (2006), which won the Delba Winthrop Mansfield prize for excellence in political science, and of numerous articles that explore the political thought of ancient and medieval thinkers, including Thucydides, Plato, Maimonides, and Averroes. She has also been the recipient of an National Endowment of Humanities Independent Scholar Fellowship. For the past six years, Linda has been a co-director of the joint History/Concourse IAP in Ancient Greece and IAP in Ancient and Medieval Italy trips. Her research and teaching interests involve ancient and medieval treatments of ethics in war, the role of women in ancient thought, and the ancient Greek inquiry into the extent and limits of knowledge. She loves to discuss movies, books, politics—really pretty much anything, and she will almost never say no to coffee, olives, or dancing. She is an adopted and devoted Cantabrigian, where she lives with her husband and their two kids.

Arnav Sheth majored in mathematics, economics, and philosophy at Lawrence University in Appleton, WI, before going on to get a PhD in quantitative finance from Rutgers University, working with mathematician Larry Shepp. He was formerly a tenured professor at Saint Mary’s College of California and is now thrilled to be a part of Concourse. Arnav’s research and teaching is at the intersection of mathematics, statistics, finance, and economics. He has over two decades of teaching experience, and he published his first book – Optimal Operating Strategies Under Stochastic Cash Flows – in 2011. His most recent publications include an algorithmic trading strategy that exploited a behavioral anomaly in foreign exchange markets using machine learning techniques, and a mathematical model optimizing voice (i.e., speaking up) in large organizations. Outside of his work, he is interested in hiking, climbing and open water swimming. He has made several trips to the Himalayas, did the swim from Alcatraz to the San Francisco Bay, and hiked the entirety of the Grand Canyon. Also, he has an Erdös number of 2.

Beth Vogel Taylor joined the Concourse Program in 2014 to teach general and organic chemistry. In addition to teaching in Concourse, Beth has taught in the Chemistry Department (5.111, 5.36, and 5.12) and is a facilitator in the Teaching Certificate Program for graduate students and postdocs through the MIT Teaching and Learning Laboratory. Beth completed her Ph.D. in Organic Chemistry in the Imperiali laboratory at MIT after graduating from Hamilton College with a major in Chemistry and a minor in English. Prior to joining Concourse, Beth was a Howard Hughes Medical Institute (HHMI) Instructor and Associate Director of the Drennan Education Lab. Beth’s research and teaching interests focus on creating and assessing resources to bring the excitement of research into the classroom and to increase the exposure of undergraduates to the research of women and people of color. Beth is also involved in teaching assistant training for the Chemistry Department and is a member of the MIT-Haiti Initiative.  Beth lives in Cambridge with her husband and two children, where she enjoys running, biking, and playing kickball.

Mary Erica Zimmer studied Literature and Classical Studies through the University Professors Program at Boston University, with graduate work in English Education, Mediaeval English, and Humanities at BU, the University of St. Andrews, and the University of Chicago, respectively, before her Ph.D. in Editorial Studies from The Editorial Institute at Boston University. She came to MIT in 2017 after teaching at both BU and Louisiana State University (whose secondary English Education program she helped redesign); she has also worked in conjunction with MIT’s Mellon-funded Programs in Digital Humanities. Her research interests are literary, historical, and editorial, with emphases in poetics, material culture, and varied forms of adaptation. To this end, she is pleased to have been part of the team responsible for MIT’s Global Shakespeares: The Merchant Module, which is accessible through the global edX platform. Her current projects include a digitized model of the bookshops and stalls surrounding London’s St. Paul’s Cathedral before the 1666 Great Fire and—with her Concourse students—a digital edition of Isaac Newton’s 1690s translation of The Book of Nicholas Flamel, which is held by MIT’s Distinctive Collections. She is happiest finding analogies, amassing pictures of things she loves best, and exploring new possibilities for programming in the humanities.

"We want to create the kind of community you might have with people you’ve known a long time, something an individual might have difficulty jump-starting on their own." --Anne McCants, Director

"Somebody who only reads newspapers and the best books of contemporary authors looks to me like an extremely nearsighted person who scorns eyeglasses. He is completely dependent on the prejudices and fashions of his times." --Albert Einstein

"Science is a conversation between rigor and imagination. What one proposes, the other evaluates." --Andrew Abbott

"You have to find time to be human. And usually there's not enough time."

“The world is much more interesting than any one discipline.” --Edward Tufte